Other oils can be refined and sometimes mixed with other oils like sunflower oil, soybean oil, … For our Alphacat CBD oil, we have chosen to use extra virgin olive oil to make our CBD oil because of the multiple benefits that extra virgin olive oil has to offer for our body and because of its synergy with the endocannabinoid system (2). Therefore in order to understand the full benefit of having a CBD oil blended with extra virgin olive oil, one has to know first about the benefit of olive oil itself: Humans around the Mediterranean Sea have used olive oil for centuries; many believe this is the key for its population’s youth and longevity as we can find in Sardinia, one of the oldest populations in the world (1). They say that their diet is the source of their long life extension. We know that in ancient times, Egyptians, Greeks and Romans have given great value to olive oil with a large description of its benefit and use. Today modern science is discovering the reason behind the effect of olive oil on the human body. Cannabidiol (CBD), ECS and its synergy with extra virgin Olive Oil.

Extra virgin olive oil contains precious compounds, including a polyphenol, named the oleocanthal (OC), with amazing virtues: it would kill cancer cells, by a process that has just been elucidated by an American team from Rutgers University and the Hunter College of the City University of New York who published in 2015 in the journal Molecular & Cellular Oncology.  They report that oleocanthal is an antioxidant compound found in extra-virgin olive oils, well preserved if the oil is obtained by cold extraction (below 27 ° C). This molecule was already known to inhibit the proliferation of certain cancer cells – in mice – but the mechanism was previously poorly known. The authors of the works, Onica LeGendre, Paul Breslin and David Foster, have chosen to study the effects of OC on cancer cells (prostate, breast, pancreas) and non-cancer cells, in vitro. As a result, they unexpectedly observed that the cancer cells would die. But, much faster than expected!  Apoptosis or suicide of cancer cell is physiologic. Dying cells enter apoptosis, a kind of cell auto-destruction mechanism. In the presence of oleocanthal, the cancer cells died in a very short time: 30 minutes for the fastest! Apoptosis could not be the only process at work. Through the fine analysis of the cellular factors in their Petri dish, the researchers have emitted a hypothesis. For them, the oleocanthal penetrates inside the cancer cells and destroys lysosomes, a kind of small internal bags that accumulate waste. Lysosomes are larger in cancer cells than in healthy cells and are more fragile too. The oleocanthal visibly damages the membrane of these bags by inhibiting an enzyme, then the cellular functions begin to weaken and then the cell dies. While healthy cells remain intact. “Targeting the stability of the lysosomal membrane is a new approach to inducing death of cancer cells,” the scientists concluded. (3) 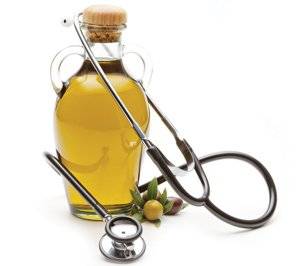 Olive oil reduces liver fat in diabetic patients. Researchers at the University of Naples have examined the impact of olive oil on liver fats in diabetic patients and published the results in the journal Diabetologica. Scientists wanted to observe the metabolic processes involved in liver fat reduction in diabetics on a diet rich in monounsaturated fatty acids. For eight weeks, 30 men and 8 women between 35 and 70 years of age with type 2 diabetes followed one of two diets that followed: a diet high in carbohydrates and fiber but low glycemic index or a diet enriched in monounsaturated fatty acids. The level of fat present in the liver was measured before and after the study. Scientists have found a 30% reduction in liver fat in the liver with the diet high in monounsaturated fats, due to olive oil and the oxidation of fatty acids in the liver after the meal. Fatty acids are usefully degraded to carbon dioxide to allow the production of energy within our cells. Other research carried out on rats shows that olive oil has a protective effect on the liver regarding oxidative stress. It would increase the activity of the antioxidant enzymes and reduce the damage to the liver. (4)

An increase in olive oil intake in mice increased the number of CB2 receptors. A diet enriched with olive oil significantly increased the number of CB2 receptors in adipose (fat) tissue in mice and reduced the inflammation and proliferation of adipose (fat) tissue in mice. This is the result of research at the National Institute of Digestive Diseases in Bari, Italy, published in the Journal of Nutrition, Health & Aging. The mice either received a standard diet with soybean oil or one of the other three diets enriched with three different oils, the soybean oil was replaced by olive oil, or by salmon oil and the third was replaced by evening primrose oil.  Olive oil showed to have the best results on the activation of the cannabinoid-2 receptor (CB2 receptor). The CB2 receptor is known for its anti-obesity effects, its anti-inflammatory effects as well as its anticancer effects. 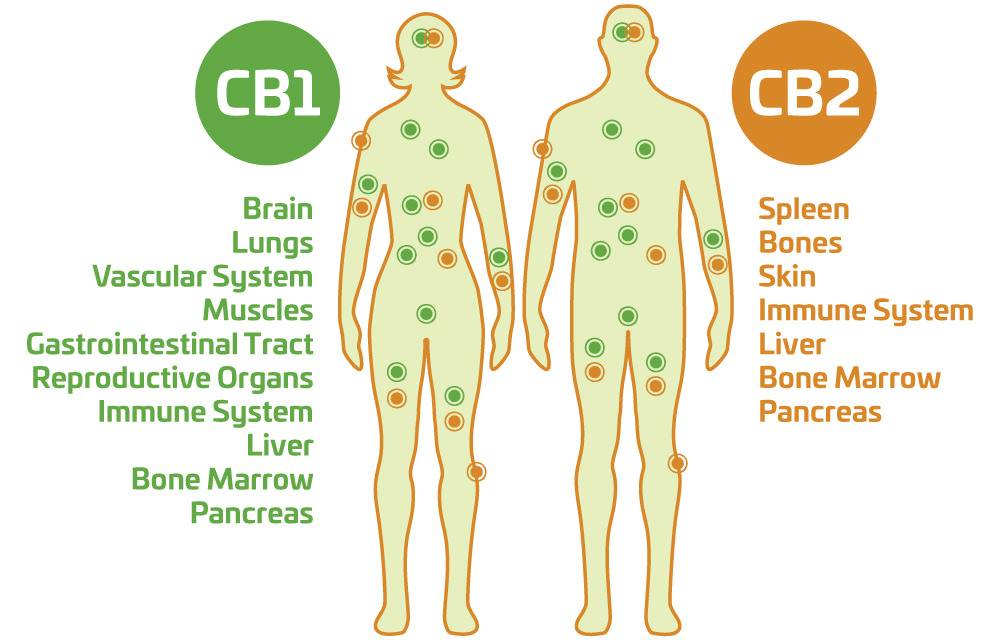 The authors wrote “the present results open up possibilities for developing new nutritional strategies by considering olive oil a key ingredient of a healthy diet”. (5)

Dr Di Francesco from the University of Terramo Italy conducted a study in 2014 about the effect of olive oil on colon cancer. The study demonstrated that olive oil modulates the expression of CB1 receptors in such a way that it suppresses the proliferation of cancer cells in the colon.  They found that olive oil with especially its phenolic compounds can reactivate the cannabinoid-1 receptor (CB1 receptor) expression in the endo-cannabinoid system, therefore this will restore CB1R to its normal level and thus would protect cells from cancer would be protected. The authors wrote that this could be a new way of treating and preventing colon cancer. (6)

Olive oil is characterized by its high content in monounsaturated fatty acids (85% oleic acid). Vitamin E content is low compared to other vegetable oils extracted from the seeds because the oil comes mainly from the mesocarp (pulp) of the olive. But most of the Vitamin E is located in the endocardium that remains in the solid part of the waste. In fact, one of the main qualities of extra-virgin olive oil is its concentration of phenolic compounds. This is obtained by cold pressing of olives, unlike other edible oils which undergo a refining process generating a strong loss in micronutrients, including phenolic compounds, as well as flavonoids. In fact, it is estimated that 50 g of olive oil supply 2 mg of one particularly interesting compound: oleuropein. Oleuropein and its metabolites have antioxidant and anti-inflammatory properties. They could thus limit oxidative stress, a metabolic disturbance associated with many pathologies. They are indeed scavengers of free radicals and chelators of metals. It has been demonstrated that the consumption of extra-virgin olive oil in rabbits increased resistance to oxidation from osteoporosis; the effect is exacerbated when the scheme was supplemented with oleuropein. In addition to these antioxidant effects, the phenolic compounds of olive oil exert anti-inflammatory activity. On a model of inflammation induced by the subcutaneous injection in rats, an improvement in inflammation parameters has been shown in animals that have consumed olive oil, compared to a control diet based on sunflower. These data have been corroborated recently by the demonstration of the improvement of the antioxidant capacity in institutionalized elderly people who have received a diet enriched with oleuropein extract and its derivatives for six weeks. (7) 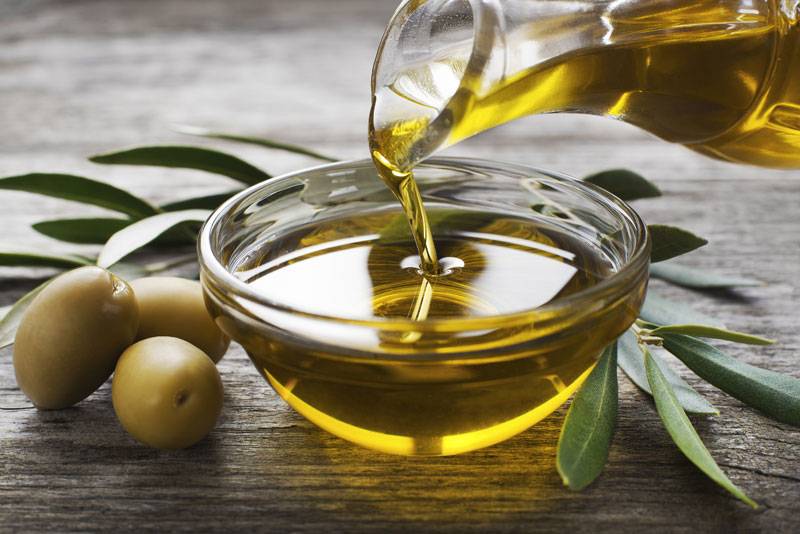 In conclusion, CBD and Extra virgin olive oil demonstrated both an activity on the cellular level of the human body. It has been shown that CBD and olive oil can reduce cell stress and protect cells from inflammation where CBD and olive oil show the capacity to reduce cell stress and to protect the cell as an anti-inflammatory effect. The synergy between the two substances provides the healthiest way to consume CBD with such a carrier as the extra virgin olive oil acting globally on the cell promoting the optimal health benefit for you. Our product has assembled the best of organic extra virgin olive oil with its phenolic compounds to enhance the CBD effect on the human body. By combining impressive CBD properties with olive oil we try to assemble the secret of longevity from the Mediterranean and blissful homeostasis. Cannabidiol (CBD), ECS and its synergy with extra virgin Olive Oil. You can find our CBD oil product in different concentrations, as you can see, by clicking here Bibliography: