In the world of legal Cannabis, regulation of the plant and plant derivatives are becoming ever more stringent.  This is a good thing, but what does it mean, exactly?  Now, any company who wants continued success on the legal Cannabis landscape must adhere to strict testing policies concerning potency, composition, and contaminants.  Now, you may ask yourself, how is this done exactly?  Well, in short, most of these tests are done for Cannabis testing method of cannabinoid for THC and CBD using variations of chromatography.  Those unfamiliar with Chemistry, Biology and other matters of the heart may not know what exactly chromatography is or what it means. 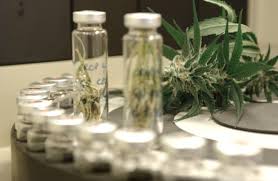 Let me explain: One can think of chromatography as the separation of various molecules by passing them through a specific matrix. Molecules will separate due to their different sizes, shapes, and charges.  Before you freak out, picture a transparent bucket with soil in it.  Now, imagine you are making a water solution and you decide to throw in some fertilizer beads of various sizes; some beads are bigger than a centimeter (i.e., the size of a blueberry), some are smaller than a millimeter (i.e., the size of grains of sand), and some are in between.  Pour that water mixture through the soil, which is your matrix, and now you see that the smallest objects in the water move through the soil the fastest and the farthest towards the bottom of the bucket and the larger objects stay close to the top of the bucket.  Chromatography works much the same way, except that the matrix used is mainly silica-based (e.g., some types of sand) and the water mixture is usually a different type of solvent with a bunch of different molecules (i.e., think cannabinoids, terpenes, etc.) depending on the Cannabis product being tested.

How do we know which molecules are present in the solvent solution that is being run through the matrix?  This is where different types of detection methods come into play.  All of these detection methods determine the molecular profile by using different elemental identifiers to elucidate the overall molecular composition of each component.  Let’s take the element, oxygen, as an example.  Oxygen has many different properties, one of which is its mass, or standard atomic weight, which is approximately 15.999 g/mol.  The majority of detection methods used for Cannabis testing rely on the total molecular mass of all of the elements in the molecular composition of each Cannabis constituent (i.e., think THC, the chemical formula for which is C21H30O2 equalling a total mass of 314.469 g/mol) in order to identify each individual molecule in the entire solvent composition.  This is keeping in mind that all molecules are made up of a combination of different elements.

Thus, imagine the sand-sized grains of fertilizer being the first and the fastest to reach the bottom of the soil-filled clear bucket (see illustration below).  Because of the speed at which these tiny fertilizer beads arrived (i.e., they were the first to the finish line), you already know the maximum size those components can be.  Next, imagine you have a detector at the bottom of the bucket that can determine the identity, or specific characteristics of each component as it reaches the finish line. Based on the arrival time of the bead to the finish line and by quantifying all of the the individual elements present in the sand-sized fertilizer beads (e.g., oxygen, carbon, etc.), you are able to see which type of fertilizer is present.

So, now that you hopefully understand the theory behind the methods being used to test Cannabis in the industry, we can talk about which exactly are favored by most labs and why.

High pressure liquid chromatography (HPLC), usually paired with mass spectrometry (MS), is one of the most popular testing methods used to test for the potency, composition, and mycotoxins (when paired with a fluorescence detector or by using polymerase chain reaction (PCR) to detect mycotoxin presence) in a Cannabis strain or Cannabis byproduct.  In this process, the Cannabis product is mixed into a solvent solution and then passed through what one can think of as a machine filled with tubular tunnels. There are matrices throughout these tubes that separate the individual components of the Cannabis product just as the various particles of fertilizer were described as being separated.

By using a liquid solvent to detect the elemental composition, a heating device is not necessary for this method to be carried out.  This is important because heating cannabinoids causes the infamous decarboxylation reaction whereby cannabinoid acids lose a -COOH group and transform to neutral (bioactive) cannabinoids.  Thus, any heating during the detection of cannabinoids can potentially cause an inaccurate reading of the neutral-acid cannabinoid content.  Therefore, characterization of your Cannabis product through HPLC will be more likely to give an accurate neutral-acidic cannabinoid profile than with gas chromatography (GC).

MS is normally paired with chromatography methods as it is able to sort components by their mass-to-charge ratio and then give a readout as to the molecular composition. In the above example MS serves as the detector at the bottom of the bucket. After the mixture is separated by how quickly it passes through the matrix, MS can detect the different components at each speed. More specifically, MS measures and separates components by their mass-to-charge ratio through processes involving ionization and being subjected to electric or magnetic fields. The results are then displayed as a spectra (i.e., think the rainbow, or Roy G. Biv), which can be easily compared to known data to confirm your results. The mass spectrometer is also useful for the detection of pesticides, herbicides, and fungicides as well as residual solvents (e.g., butane, propane, and other solvents used for the purpose of making Cannabis concentrates). 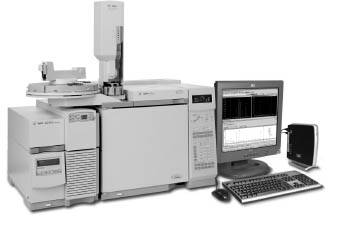 GC, generally paired with flame ionization detection (FID) and a headspace autosampler, does involve the use of heat during the testing process.  Therefore, this method is better utilized to check for the presence of terpenes and residual solvents because many of these compounds are quite volatile in the first place.  However, it is still possible to use this method to profile your Cannabis product and to check its relative potency (i.e., percentage THC).  In GC, rather than the solvent being in liquid phase, the solvent and your product are heated to gas phase, sometimes in headspace auto samplers (i.e., machines that make testing each sample’s gas phase uniform and efficient), then detected usually with a FID unit. However FID measures only concentrations of organic species, while MS can measure inorganic and organic species. While both methods generate ions, MS can do so in solid, liquid, and gas phase samples using several ionization methods. FID specifically generates ions through combustion of the sample material with a hydrogen flame.  This generates differently charged ions based on the composition of one’s sample material and through quantifying these ions, various molecular compounds and their concentrations can be identified. 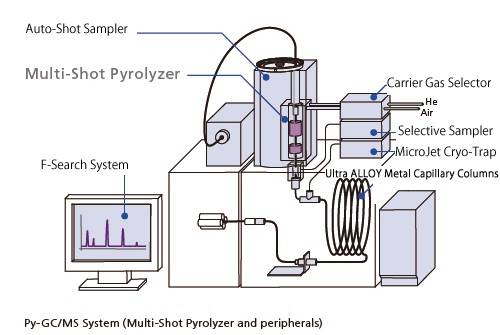 Last, thin-layer chromatography (TLC), and specifically Alpha-CAT’s high performance thin-layer chromatography method, can be used to give the individual user an approximation of the cannabinoid content in their Cannabis strain or byproduct.  This method is the most visual of the methods discussed.  Meaning, utilizing the solvent provided in the kit, one can extract their cannabinoids, apply them to the matrix (i.e., a thin sheet of glass with the white silica matrix spread on top), let the compounds separate utilizing the same theory of the soil and the fertilizer beads as described above, dye the silica-glass sheet, and see the resulting cannabinoid compounds as differently colored spots spread out on the white glass sheet.  Using the calibrated rulers provided in Alpha-CAT’s individual testing kits, one can measure the amount of tetrahydrocannabinol (THC) (e.g., both acid and neutral), and cannabidiol (CBD) (e.g., both acid and neutral).  Four other acidic and neutral cannabinoid compounds can be tested using this kit; however, the calibration charts for cannabinol (CBN), cannabichromene (CBC), tetrahydrocannabivarin (THCV), and cannabigerol (CBG) are sold separately. Though less accurate than HPLC or GC, it is possible to determine cannabinoid concentrations from 1% up to 20% with only a 1-2 percentage point error. For cannabinoid concentrations exceeding 20% and less than 1%, the percentage error generated will be directly correlated with the concentration (i.e., the ratio of Cannabis product to solvent used) of the original sample. Although most Cannabis products purchased at a dispensary will have already undergone testing by the provider, if you don’t have access to dispensary products, the Alpha-CAT HPTLC test is possible to perform at home in less than one hour and is far cheaper than any testing facility to which you can outsource.