Skip to content
New Pricing for a Better Wellness 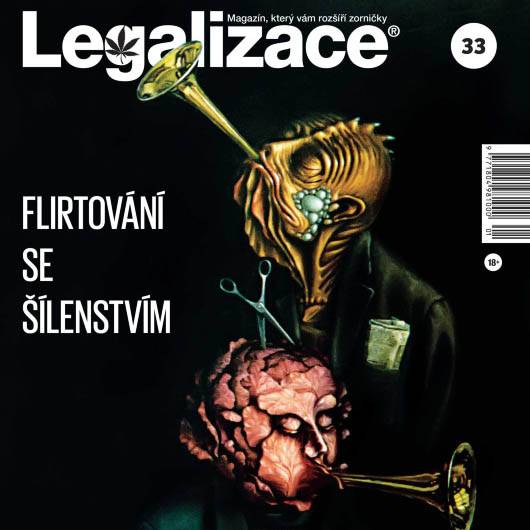 Give thanks to “Magazín Legalizace”  (The First Czech Magazine for Cannabis Culture) for interviewing Sébastien, CEO and Founder of Alpha-cat.

The magazine even named him one of the International Important Figures of Legalization Movement! Here is the english version of the interview, otherwise for Czech speakers, you can find the two full page interview in the January 2016 issue and at the end of the article.

Sébastien, you have been living in Prague for a year, what is the story behind your moving here?

I moved to Prague in March 2015, a month after I got raided in France at my office and private apartment. Police came to my place because, in December 2014, I made a media campaign for a product I created: KanaVape, a CBD electronic cigarette. On the day of the press announcement, it was a big controversy as some media mentioned our product as an “E-joint”, which is not true, because it does not contain any THC, the molecule responsible for the “high effect”. Right after the announcement the French Health Minister declared she would ban KanaVape in France. Then the next thing I know is the police knocking at my door at 6 AM. The police searched my apartment and my lab in order to find any evidence of illegal activities. As I have a prescription for Bedrocan (legal Dutch cannabis for medical use), I also had 19 plants in my apartment. The police took me for 48 hours long interrogation and confiscated all my equipment, laptop, stock, and paperwork. I am still waiting to get my personal belonging back.

I have been diagnosed with ADHD (Attention Deficit Hyperactivity Disorder) when I was a child. I am a medical cannabis patient since 2009, when I got the recommendation from Dr. Colombera from Luxembourg. In 2011, during my MA studies of Plant Science in Holland, I was prescribed a strain called “Bedrocan flos” by a Dutch psychiatrist, which I was then enable to buy it in my local pharmacy next to my flat. Since I am officially a medical cannabis patient in the EU, I have travelled to my hometown in France, legally with my cannabis under the Schengen Agreement. When I moved back to France, a French doctor in Strasbourg prescribed me Bedrocan under a French prescription and I can pick the cannabis up in Dutch pharmacies which recognize EU medical prescription. However, back in France it is a crime to posses any cannabis.

What is the situation in France now regarding legalization of medical and recreational cannabis?

Medical cannabis has been allowed through a “Decret” in 2013 and in ¨January 2014 Sativex has been allowed to enter the French market. Due to its high cost the French « Comité Economique des Produits de santé » (CEPS) has not agreed on the retail price and in January 2015 the Commission declared that there are no benefits for public health and people do not need to access cannabis medicines urgently.

The French paradox is now leaving medical cannabis patients with hope but with no access leading them to buy unsafe product on black market. It is making medical cannabis patient criminals, suffering of their ailments and cannabis’s illegal status. Under these conditions patients cannot have medical supervision using safe herbal cannabinoid treatment. On the other hand there have been five court cases with patients found cultivating in their private houses, including me. We were guilty of possession and production of cannabis, but did not get a sentence, because we all have a doctor’s certificate supporting our medical use of cannabis.

Regarding the recreational use, all major cities in France, like Marseille, my home town and second largest city in France, there are “open air coffeeshops” where people can buy hashish and herb of different quality and price just like in Amsterdam – but openly on the street. Cannabis is a big taboo in France and politicians don’t want to look at it objectively. France is the biggest cannabis user in Europe after the Czech Republic. As our neighbouring countries are evolving on the topic, I believe France will have to follow and create its own medical cannabis bureau like in the Netherlands and Czech Republic.

You are using cannabis medically nowadays, when did you first try it in your life and what was your impression? When did you become a regular user?

I have smoked herb for the first time when I was 13 years old. It was during a lunch break at school. When I got back to my class I felt relief from my ADHD as I was more quiet, concentrated and careful in listening to my teacher which gave me a pleasant feeling. Since then I have been using cannabis to calm me down and bring more attention into what I do. Cannabis quickly became a significant part of my everyday life!

What is your educational background?

I have a Master’s degree in Plant Science specializing in herbal cannabinoids production. I have done my master at Wageningen University in Holland, sponsored by Bedrocan, the only Dutch licensed cannabis producer for pharmacies. For my Bachelor Thesis, I worked with public institute in Italy in the medical cannabis program that is now run by the Italian military. Along my academic journey, I had the opportunity to attend international conferences about medical cannabis and horticulture, to be at the forefront of cannabinoid medicine evolution. I understood that the biggest gap was in production and the quality standards to ensure safe access medicine to patient.

You are now a member of executive board of IACM, what does it mean and what do you do there? You are also a member of other cannabis patient organizations; can you tell us about them briefly?

In September 2015, I attended the 8th International conference on Cannabinoid Medicines. It was in Italy, organized by the International Association for Cannabinoids as Medicine (IACM). This year there were 260 scientists from all continents. This event happens every 2 years and this year I have been elected by the IACM board members as a patient representative. My role is to express patients’ point of view to the board members regarding the accessibility and use of medical cannabis and its official recognition. This is in order for the board members to create a strategy that can help patients to get the best medical advice from doctors and the international authorities.

What is your opinion on medical and recreational legalization – should they be treated as two separate issues or together?

Medical and “recreational” or “normalization” of the cannabis use are 2 different issues. When we talk about medical cannabis we are referring to a group of people dealing with intense pain and possibly dying. They may often use cannabis as their last option to seek for hope to recover. It means it is extremely important that they have a total assistance of their physicians, helping them to understand cannabinoid effects and to provide them with safe access to cannabis. The problem today is that physicians and health professionals are still very conservative and approach cannabis users cautiously. That is why it is important to separate both matters.

I believe once the medical community will understand all aspects of cannabis they will be able to support the larger aspect of its consumption. For example today we are seeing new scientific studies saying that cannabis is less harmful than alcohol or prescription drugs. In this regard, having alcohol legal and cannabis illegal is becoming more and more a nonsense which in long term will definitely lead to general legalization of cannabis. It is now just a matter of time; as the UNGASS in New York is due in April 2016, cannabis should be rescheduled into a different class so that it can be legalized worldwide and used.

The presentation you had during conference at this year’s Cannafest in Prague was about harm reduction and medical use of cannabis – and this is what your business is about – can you very briefly describe to our readers what your company Alpha-cat offers to patients and recreational cannabis users?

In my presentation during Cannafest I talked about cannabis in harm reduction field. I choose this topic because today’s scientific publications are explaining that cannabis can decrease the addiction of alcohol, prescribed drugs and other illicit drugs. This shows that cannabis is not a gateway drug as many politicians want us to think, but instead it could be a “gate out” drug. Especially today when we know that Cannabidiol (CBD) can have good anti-psychotic and anxiolytic properties; which are the two main side effects of drug withdrawal. We can see a big potential of CBD use to reduce drug abuse. CBD is also an antagonist of THC meaning it can reduce psychotic effects of THC to minimize THC intoxication. On the other hand we are also seeing a strong increase in THC content of current strains on the market. Plus new techniques of cannabis products manufacturing lead to up to 80% THC (shatter, wax, BHO…). These factors underline the urgent need of test cannabinoids in order to know how many and how much of cannabinoids is present and estimate the potency to avoid bad surprise when consuming during inappropriate time of the day for example.

My company Alpha-cat Lab specializes in quality control regarding cannabinoid production. The aim is to educate cannabis users and explain them the importance of active ingredients in cannabis. Our first focus is the characterization of cannabinoid presence in cannabis plant and its derivate products. For this purpose I have developed and commercialized a home test kit that can be used by average cannabis users to determine and quantify which cannabinoid are in their cannabis product. With the Alpha-cat test kit they can now detect six main cannabinoids (CBD, CBN, THC, THCv, CBG, CBC) and their acid form as well. For those who don’t know, cannabinoid acids (CBD acid, THC acid…) are found in raw cannabis. It is only by temperature reaction like combustion, inhalation, cooking preparation etc. when for example THC acid becomes THC “active”.

Thanks to Alpha-cat test kits, it is now possible to know the cannabinoid profile of your strains or derivate products in 40 minutes. No need of scientific background, no need of equipment other than in your kitchen. It means you don’t have to wait for up to three months to obtain your results when sending sample to a laboratory (if this option is available at all). The price of a test with Alpha-cat is around 10€ and you don’t need to have a special permit. You can do it quickly at your location and finally know what you are consuming in your cannabis, for a better health.

What are your future plans – are you going to live in the Czech Republic, or do you want go back to France or elsewhere?

My plans for the future is to help EU investigate in depth the use of cannabis as natural therapeutic and work on a large observational study of cannabinoids’ effects to understand how people can benefit from cannabis properties the most. For now I don’t consider working or living in France again especially after what happened on the 13th November. France is facing a difficult time in its history before evolving in this cannabis issue.

Is there anything you would like to say to our readers regarding our global legalization fight?

Be smart when you consume cannabis, get to know your strains and its cannabinoid composition. Investigate for yourself to understand your personal relation with cannabis and your specific needs. Educate each other by talking about it with friends and family. And of course, medicate! “One spliff a day keeps the doctor away!” 😉

See below the scanned version of the interview in Czech :

Special Thanks to Lukáš Hurýsek & the Legalizace Team for this interview.

Hemp Vs Marijuana: 4 Things You Should Know

How CBD Oil Helps In Meditation